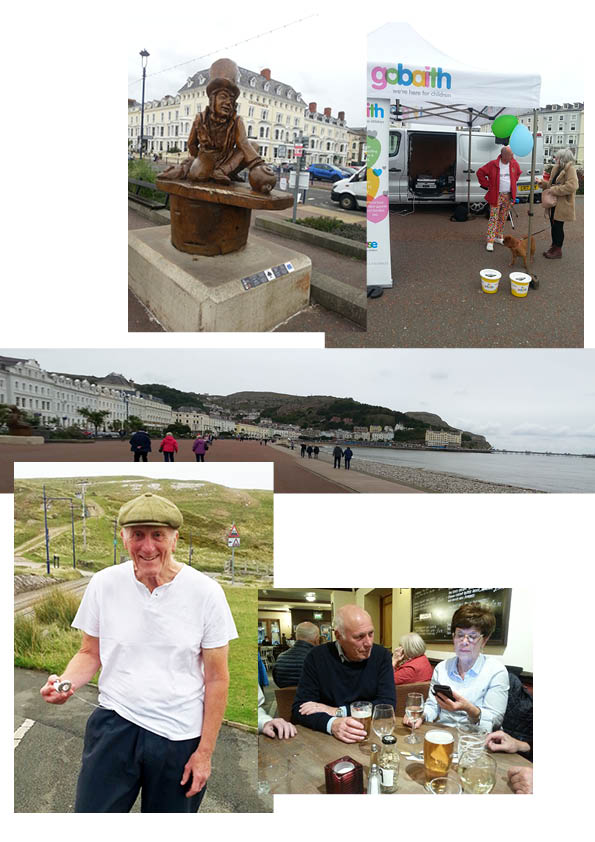 There are a number of exquisite public art wooden carvings based on 'Alice in Wonderland'. The Mad Hatter was opposite the Queens Hotel on the promenade. Inland, there were March Hare, Queen of Hearts and a caterpillar. Queenie had rotting toes. Graham Evans suggested she was incontinent.

The Mad Hatter has a famous attribute, a feature shared by Rod Gooch and myself. We don't have the same hairdresser, but we do go in for the same style of headgear for the follicularly challenged. 'Peaky Blinder' is my current favourite. Rod was concerned about the button on the crown. Caps without are inferior apparently. My other touring cap is a match with my 'Harris Tweed' jacket and is buttonless. It's a personal blow.

The fund-raiser for the children's hospice caught me without cash. Unintended - the childbride is a similar volunteer. Rod met him when in full regalia - multicoloured T-shirt as well as trousers, red jacket and wait for it ... red top hat. Splendid, less so when I came later. Did Rod put in a bid for the hat?

Great to see Anne and Jim. Anne is one of Colwyn's pianists. We had a much better experience in 'Dylans' restaurant than they did.

I admit to being a child again with a new toy. It's a comfort thing. Second-hand pocket watch from the repair shop at Elsecar Heritage centre and chain from Beaverbrooks. I was cooling off from the Gt Orme ascent.