Suffering 1: A Bike Ride with the choir 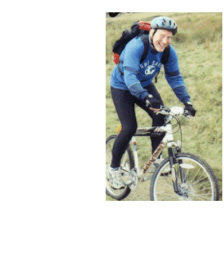 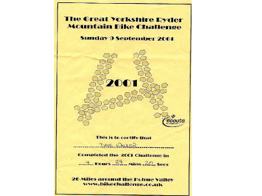 One year, New Mill Male Voice Choir cycling section asked me to join them for The Yorkshire Rider Mountain Bike Challenge. How difficult could that be? And it was for charity. Maybe I was knocking on, but not that old.
We’ll need to try out the route they said. The chain on my road bike broke within five minutes, followed by long walk home and a trip to buy a chain repair kit. Next practice, on a mildly undulating strip of mud and rocks, I lost my grip, fell off, hurt my elbow and bust a toestrap. Remounting, the rear mech rattled and scraped against the wheel spokes.
I told my wife I wasn’t doing it. But she’d baked a cake. Have a piece and sponsor this idiot she’d asked her workmates. ‘I’ve got you £30 and they’ll want to know if you’ve done it.’
I’m still not doing it. I’ll give the money back. No, I’ll do half and give half back. Oh, shoot, I’ll do it.
A friendly bass offered me a bike, ‘I’ve borrowed one from a mate so you have my old one. The rear brake’s a bit sticky and the chain slips.’
‘Well if you’re not riding it, neither am I.’
I gave the hire shop a ring. Collect it Saturday. £20 to hire, £50 deposit, add on £12 to enter the race, £7.50 for a chain kit, cost unknown for the mech. Over three times the sponsorshop. They told me how to take the wheels off, use tyre levers and replace an inner tube. Then I had a test ride. Easy. Gears here, the brakes work, seat was a bit low, needs adjusting. Five minutes and I’d got it? Ha ha.
I didn’t look out of place at the start. ‘Where’s your front brake?’ a baritone asked. ‘I’m sure I had one yesterday,’ I replied. But I couldn’t see the cantilevers. ‘You’ve discs,’ said a bass. ‘Oh good.’
We started in the second row. The third row was past me before I’d got to the end of the village. Right on the first track and the saddle dropped. I got off and tightened it. The gear was too low to get going again and until I got on I could’t change gear. By the time I was riding again, all the women and children, veterans and wheelchairs had gone passed.
Every few miles, small groups bunched round upended bikes, tools and grease everywhere, and guys walked sadly holding broken chains. All my downhill were fights. With the bike, the stones, the steepness, and the brakes. My forearms were on fire.
Then a break on Holme Moss, lovely dry sunny and windy. My saddle suddenly lurched forward, really loose like a sea-saw. Second tenor Barry fixed it with a spanner from his large rucksack of tools. He had a fan club, which lurked round corners unseen. ‘Come on Barry,’ they shouted. Then their faces would pop up over a wall.
The first fourteen were the easiest. Regular chocolate bar and water stations, encouragement from the marshals as they gave me a tick. At sixteen I ran out of gas and the last ten were a blur. Walking up the hills, in fear of my life down, wobbling up and down on the saddle, legs and arms aching, bum sore. I was speechless at the finish, except when some pencil neck tried to blame me for losing a checkpoint tick.
The winner was over fifty and did it in two hours, eight minutes. If he’d’ve gone round again, he’d’ve lapped me.
There were two fliers under the windscreen wipers inviting us to take part in races the following month. I tore them up. A bass came across, ‘Can I put you down for next year?’
‘Ooo, let me think . . . ‘  Even the most irrepressible of do-gooders would have known to give it a rest and quietly walk away.
The bike shop returned my £50.  One of them engaged me in friendly banter, ‘My mate did it last year, came seventh and in fixed gear. Takes some doing that.’ I bet it did.

Diary of how I came to join the choir 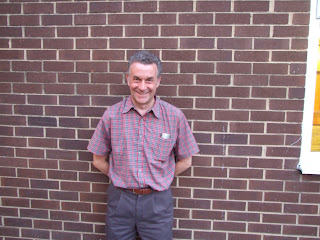 January 2007 - It’s not every day you retire. After 39 years I’m just waking up to the fact that my daily bike commute to Leeds
Road is over. What now? I’ve worked in IT since the age of 19 so maybe provide a service to anyone in difficulties with home PC’s
or who wants to know a bit more about software, particularly Microsoft Office. Broadband is a minefield for some so there’s work
there too. Have you seen how much PC World charge for these services? Must be an opportunity to undercut those guys. So let’s
see.
March 2007 - Remember when you were in work and that smug retiree told you how busy he was? You didn’t believe it. Well it’s
true. There’s lots of things to do, often unpaid and time consuming but nontheless rewarding. Social life expands into daylight
hours. Is this the transition into ‘The Third Age’?
May 2007 - Met Graham in Holmfirth. Still banging on at me to come along to New Mill Choir. Some of the guys play bowls on a
Tuesday afternoon. Come along. Sounds a nice change to bashing bike pedals. Although I can see through his cunning plan, I have
to admit to an interest. But it’s raining.
June 2007 - Still raining.
July 2007 - More rain.
September 2007 - Met Graham in Holmfirth again. The seed he planted in May must have germinated somewhere. I provisionally
agree to go along to a choir concert at St Paul’s in October. My resistance is weakening.
October 2007 - The concert is good fun and enjoyable, but can I sing like these guys? Three pints in the Star and it’s agreed I’m a
baritone and I’m going to the next rehearsal at New Mill club.
Three days later - Hustle and bustle, smiling faces, lots of introductions and before I know it I have a thick book of music and
I’m invited to join in and sing. As 50 male voices rise to a crescendo, the hairs on the back of my neck rise. I must be part of this.
The music is hard at first but I quickly get the hang of the simpler stuff. Afterwards there’s a sociable gathering in the bar with
supper and a well-earned drink. This isn’t bad!
November 2007 - That first night sets the pattern for the following weeks. Raymond, my neighbour, puts aside his apprehension
and comes too. We sign up to go to the workshop in Scarborough.
Scarborough 2008 - Excellent way for any choir ‘newbie’ to broaden his experience. Energy levels are high and the concentrated
workshop sessions give me more confidence. Bags of opportunity to meet and chat with the people I sing with, even though I
wondered whether the invitation to go for a run at 7:00 am was a wind up. Most impressive is the Tadcaster concert. The choir
produce an emotional performance despite a full weekend of singing and, for some, long and deep drinking. I can only assume the
Spirit of Elvis is upon them – those at the ‘show’ on Saturday evening will know what I mean.
Spring Concert, St Paul’s - First sing in public. I’m pretty nervous. Take the words of some songs to Town v Tranmere. A quick
run through at half time and again in Sainsbury’s café after the match. I sang in the massed choir event at the Town Hall but that
was relatively anonymous and we had the words. This time it’s from memory and I know it can suddenly go blank. Even though
I’ve appeared in amateur shows and performed simulated sex on stage at the LBT (yes, really!) the nerves drag at the stomach. We
begin with ‘The Heavens Proclaim’, a chance to open my lungs, have a good rant and settle down. I make a contribution to many
of the other pieces. In certain songs, I really should keep my mouth closed, but instead try to follow Elizabeth’s guidance and at
least do something. Note to self – make more effort to get these things learnt! The concert finishes and, with trepidation, I seek the
verdict of my partner and ex-choir accompanist, Sue. She judges it a success.


So it’s back to the Star to round off the evening with a beer or more. Which is where this started really.
Posted by David Walker at 02:19 No comments: