Lent - can you give up music?

My pal Greg has given up alcohol for Lent and is still managing. I have stopped being grumpy, or that was the intention. Trevor Cox tried to give up music - listen to his podcast.

What might be the ups and downs of not having music in our lives?
A strong benefit is not being influenced by background music in pubs, restaurants and clothing shops. Professor Charles Spence describes how, for example, so-called background music (French, German) in a restaurant influences our food and wine choices. Similarly, fast and slow tempo music can speed us up when they are busy or slow us down when they are slack. Apparently we have no recollection of this as we leave.
There may be costs such as not appreciating or even getting the point of TV and film drama. Composer Debbie Wiseman tells us we can often get the drift of things purely with the music. And not the Hollywood variety - better music that creates mood and emotion - space to take in what is not being shown on the screen. If you have the habit of watching these programmes with others, then that social time would also suffer.
Another cost is the lack of brain arousal. Switched on at a low level. According to Dr. Victoria Williamson it would be quicker to list what brain structures don't light up when listening to music. Even basic reward centres that deal with our survival as a species - like the need for food, water and sex. These centres lie between memory and emotion, so it's all quite a light bulb. We may need to seek substitutes - drugs, sex and rock'n roll (no, I really mean chocolate).
There are medical connotations, not directly related to the absence of music, more a consequence of other factors. Anhedonia is a mental symptom when we are unable to enjoy what would normally turn us on. If, over a long time, we stop listening to our favourite music along with other things we normally take pleasure in, our friends and relatives might need to think about depression. 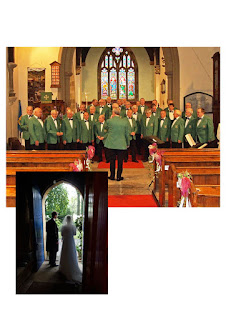 Amusia is the technical term for tone deafness. It effects 4% of the population from birth and can be a side effect of brain injury in later life. Again there is no pleasure in music. Tone deaf people cannot make sense of music and cannot recognise a familiar tune says Lauren Stewart. Sadly they can avoid normal everyday interactions involving music and can be social hermits.

To summarise Trevor Cox's exploration of not having music in our lives, we lose the personal gain of enjoying and being inspired by something and also the relationships we nurture as a result of the shared interest or passion. This surely resonates with New Mill MVC, who gain from both simultaneously.

The question remains 'what is music?' Tom Service from the BBC talks about music as sound which we interpret as meaningful. Otherwise it is simply a sound. Take a baby crying - there is pitch, tempo and timbre with a large number of interpretations. There can't be many sounds that don't arouse personal meaning. According to composer Edgard Varese however we need to organise the quality and quantity of sounds before we would call it music.

If music is simply a meaningful sound, it would be rather hard to give it up for Lent. It's all around us. Easier if it were organised sound.