Roderick Williams OBE, with guests, talks about choral music. On the one hand he says there are over 40000 choirs ranging from pop to classical - on the other he wonders if singing in Britain will survive. There has never been a better time for new writing by composers for specific choirs as commissions. There are two very popular current choral recordings: (1) Tallis - Spem in Allium - (clic here for Utube) which features on the soundtrack of 50 Shades of Grey and (2) Mealor - Ubi Caritas - (clic here for Utube) from the Catherine and William wedding (Mealor wrote Wherever You Are for Military Wives).

Yet, Rod says, singing is on the decline. In a 1927 recording of Abide With Me from the Soccer Cup final, 92000 fans knew the words and music and just sang. A good proportion of the crowd today would not know the words. TV, Radio, Records, CDs and all the other ways of listening to music have expanded at the expense of personal singing. Weddings and funerals have less hymns and attendance at church generally is falling. If a singer is needed, he/she/them is brought in - just like New Mill.

In pre-industrial Britain, people sang at work - spinners, weavers, waggoners, farm labourers, sailors and so on. The musical rhythms fitted the work tasks and helped get the work done. This spilt into leisure, down the pub and in the music hall. When factory discipline came in, singing was banned and those that tried were fined. Some establishments even had no talking. Anyway the machines were very noisy, sidestepped by the lip-readers of the Dundee Jute Mills.

Class and snootiness have also had a role. Since the nineteenth century, voices of the ordinary people have been looked down upon by the gentry and those who would like to be gentry. Crude, unlettered and vulgar are some of the words used. An attitude that transferred to education. Personal singing down the pub and in the music hall was raw and edgy and frowned upon.

Rod introduces two organisations that simply sing - Natural Voice Network and the London Bulgarian Choir. They encourage people, whether they think they can sing or not, to connect with others and share the joy of making musical sounds together. The London choir, with many English speakers, cannot understand the words, so it's all about making great sound. Like us or me singing in latin - maybe not the great sound bit. Ged is conducting us in Ilkley for just this sort of piece. 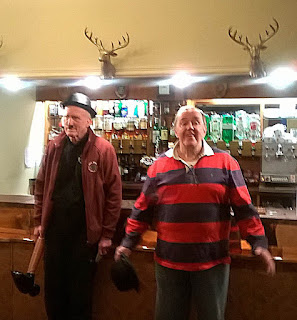